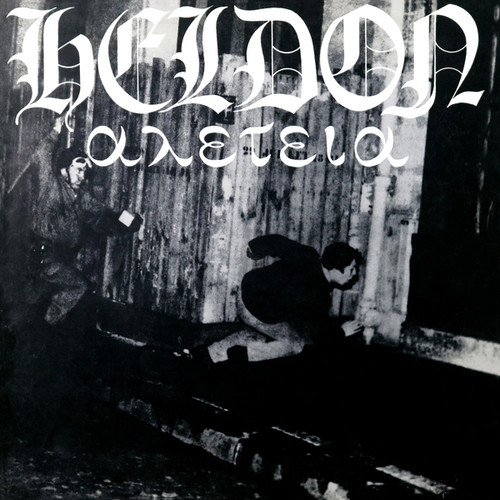 Bureau B present a reissue of Heldon's second album Allez-Teia, originally released on Disjuncta in 1975. Before making his own music in the early '70s, Richard Pinhas was a King Crimson fan. The British group has buzzed in Pinhas's mind for decades, but their greatest impact came early. When he first saw them play, Pinhas was struck by music played during intermission. "When I saw (King Crimson guitarist) Robert Fripp and Brian Eno perform in Paris later, I realized that the intermission music was their work," Pinhas said. "I didn't know that when I first heard it, but I was very impressed by it. It was the most important influence on Heldon." That influence is clear on Allez- Teia, originally released in 1975 on Pinhas's own Disjuncta label. "In The Wake Of King Fripp" is a soaring mix of string-like electronics and smeared guitar, a reference both to the guitarist and King Crimson's second album In The Wake Of Poseidon (1970). The meditative "Omar Diop Blondin", in which free tones float above a repetitive guitar figure, is dedicated to Fripp and Eno. A strong influence also comes from The Soft Machine's Robert Wyatt, who was slated to record some tracks with Pinhas for Allez-Teia until the expense of his travel from London to Paris proved prohibitive. Yet Allez-Teia - the title a nod to the ancient Greek term for philosophical truth, "aletheia" - is hardly a tribute album. The pieces Pinhas crafts with partner Georges Grunblatt - guitar, Mellotron, ARP synths - are beatific on the surface but infused with undercurrents of tension. Over four decades after he made Allez-Teia, Pinhas's admiration for King Crimson remains profound. He actually met Fripp in 1974, and the two still stay in touch. "We have a great friendship; he has been very helpful," says Pinhas. "Fripp has always been my Hendrix." Some artists might balk at admitting such strong influence over their own work, but for Pinhas it's all about respect. "In the academic world in France, you list your sources," says Pinhas, who received a PhD in philosophy before launching his music career. "So I thought it was good to say, 'Yes, we are influenced by this, and we are proud of it, and people have to know it.' The work of King Crimson at that time was very important. It's not a secret." 2018 remaster by Willem Makkee.
This website uses cookies to personalize content and analyse traffic in order to offer you a better experience.
I accept Learn More
back to top