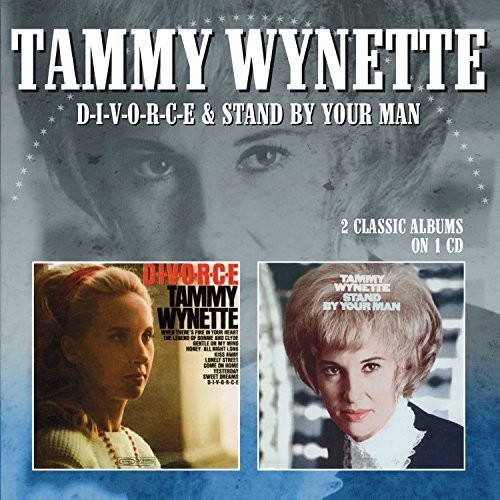 Digitally remastered two-fer containing a pair of albums by the country music great on one CD. This release contains classic country music, the real McCoy featuring a truly one voice-of-a-kind singing timeless country songs. Here are two albums headed up by ground-breaking classics, 'D-I-V-O-R-C-E' and 'Stand By Your Man', songs that assured the future of a rising star back in the late 1960s. Tammy Wynette, the singer with a sob in her voice who frequently lived the heartache and heartbreak heard in the lyric of many of her songs. With these two albums side by side, it provides an ideal opportunity to flash back to Tammy's early days. Known as The First Lady of Country Music, she was one of the music's truly iconic figures. This much loved entertainer, who, during a 27 year recording career, saw the release of 42 studio albums and charted 73 singles. The D-I-V-O-R-C-E album released in 1968 reached #1 on the Billboard country charts. The Stand By Your Man album released in 1969 reached #2. Both albums remained on the charts for 36 weeks and the title tracks from the albums both reached #1 on the singles charts. Classic songs included on this package include 'Gentle On My Mind', 'Honey', 'Sweet Dreams', 'Yesterday' and 'Lonely Street. Both albums produced by legendary producer Billy Sherrill.