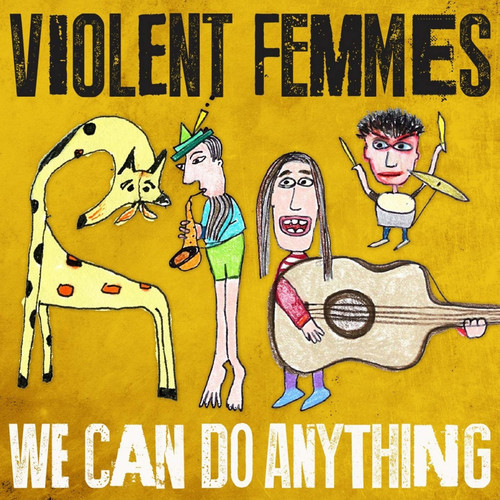 We Can Do Anything [Vinyl]
Artist: Violent Femmes
Format: Vinyl
New: In Stock $17.99
Wish

We Can Do Anything follows 2000's Freak Magnet and marks the group's ninth LP. It was recorded in Brooklyn, Nashville, Los Angeles, Milwaukee and Denver during their summer tour. Jeff Hamilton — a multi-instrumentalist in the Femmes' ever-changing backing band, Horns of Dilemma — served as producer, while John Agnello (Sonic Youth, Dinosaur Jr.) mixed.

The We Can Do Anything cover art was drawn by Kevin Hearn of the Barenaked Ladies, whom Violent Femmes toured with over the summer. He also contributed accordion, guitars, keys and backing vocals to several songs on the album.

Violent Femmes frontman Gordon Gano culled a handful of songs for We Can Do Anything from his trove of old cassette demos and journals, including "Big Car" and "I Could Be Anything." He also shared writing duties on various songs with Sam Hollander, Dave Katz and Better Than Ezra's Kevin Griffin; We Can Do Anything also boasts one cover, "What You Really Mean," which was written by Gano's sister, folk musician and artist, Cynthia Gayneau. A complete track list is below.

After several years of hiatus, the Femmes reunited in 2013 with a performance at Coachella. Their first few shows boasted the trio's original lineup of Gano, bassist/keyboardist Brian Ritchie and drummer Victor DeLorenzo, but DeLorenzo was ultimately replaced by Brian Viglione (Dresden Dolls, Nine Inch Nails)