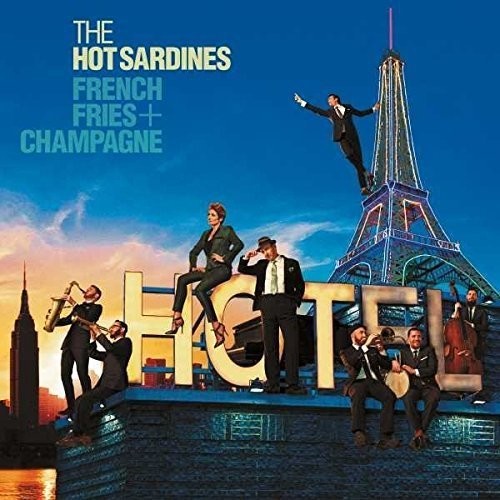 After the incredible success of their debut self-titled album, The Hot Sardines return to the spotlight with a new album entitled French Fries & Champagne. While the new album continued to show the Paris-meets-New York backgrounds of the bands leaders, vocalist Miz Elizabeth and bandleader/pianist Evan Bibs Palazzo, French Fries illustrates the duality of the Hot Sardines ethos: on one side, they are a rollicking, lowbrow, gutbucket R&B and Hot Jazz band, who love to let the good times roll, reveling in the simple pleasures of a good plate of fried food and a sizzling foot-stomper from the 40s and 50s American South.

On the other Champagne side, the Sardines are the elegant, smooth, soft and luxurious lovers of lush orchestral arrangements of ballads about newfound love, loss and loneliness.

Tracks range from Running Wild, the hit from the 1959 Billy Wilder classic rom-com, Some Like It Hot starring Marilyn Monroe, Jack Lemmon and Tony Curtis, to People Will Say We re In Love, from the 1943 Rodgers and Hammerstein Broadway smash, Oklahoma!.

Theres even a jazzy version of the 1985 smash Pop hit, Addicted To Love, made famous by the late British blue-eyed soul singer Robert Palmer and the Power Station.