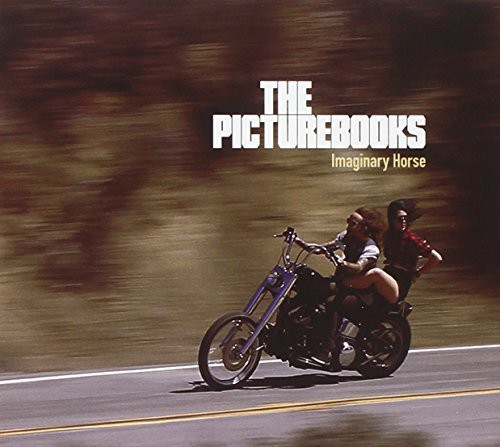 The Picturebooks, a blues-soaked duo featuring singer/guitar player Fynn Claus Grabke and drummer Philipp Mirtschink. The German band release their North American debut album, Imaginary Horse, on Oct. 7 via RidingEasy Records. Music, skateboarding and motorcycles, that's all we need," says Grabke. The pair, who hail from Grsloh, Germany, are well known in motorcycle circles for their custom creations and the bands unique working environment that's part recording studio, skate park and chopper garage. From Dice Magazine to Kustom World, Custombike or Kustom, their bikes are featured in chopper magazines worldwide. Fynn, the son of famed 80's era skateboarder Claus Grabke, and Philipp have trekked across the European continent for the past four years, combining their passion into a lifestyle that's reflected in their wall-shaking music. The Picturebooks retreated to their "garage" in order to record Imaginary Horse during early 2014. Mirroring their daredevil skateboarding ethos, they broke rules while recording. For starters, there was considerable physical space between the musicians and the microphones, and it wasn't simply a sterile studio environment. The concrete floors and airy expanse contributed to the sound, and the overall atmosphere proved quite apropos. Ultimately, all of these pieces form a blues rock pastiche that's as individualistic as it is infectious. The Picturebooks' Imaginary Horse becomes a reality for rock 'n' roll now. "We never wanted to sound like anybody else," concludes Fynn. "We've done everything possible to create something of our own. I hope people see that, hear it, and feel it." For fans of Graveyard, Uncle Acid, Kadavar, Black Keys, White Stripes.
back to top