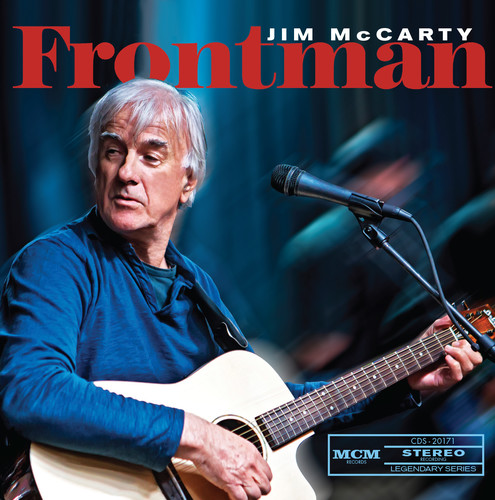 Member of the Rock N Roll Hall Of Fame, founding member of the Yardbirds, Renaissance, Box Of Frogs, Shoot, and other projects. First time on CD. A 2LP vinyl version of 'Frontman' sold out in preorders for Record Store Day 2014. The CD version contains 2 brand new recordings that were not on the LP version. As a founding member of the Yardbirds, Jim McCarty's place in rock 'n roll history was assured, had he retired in 1968. But the creative spark that helped inspire 'I'm A Man', 'Shapes Of Things', 'Happenings Ten Years Time Ago', providing the foundation for heavy metal, psychedelic hard rock, Led Zeppelin and Cream, to name but a few, could hardly be satisfied with a few hits during the British Invasion. Shortly after the untimely demise of the Yardbirds came the first 'Renaissance' album, with it's pedigree of McCarty & Keith Relf, sister Jane Relf, Ex-Nashville Teen John Hawken and Steamhammer's Louis Cennamo. It was an album far over the heads of most rockers, and it in turn helped launch what became known as progressive or symphonic rock, a natural progression for the Yardbirds' creative spark. No thought of simply continuing in the same path, this new adventure was just that, trail blazing with the same passion that the Yardbirds had exhibited. Renaissance gave voice to McCarty & company in fresh new terms, combining a truly progressive rock approach, majestically lyrical, with roots in classical music and romanticism never before heard in a rock format. Once again, they had changed the game, and with Renaissance and then Illusion, Jim McCarty the songwriter truly emerged, up front, never to retreat.
back to top