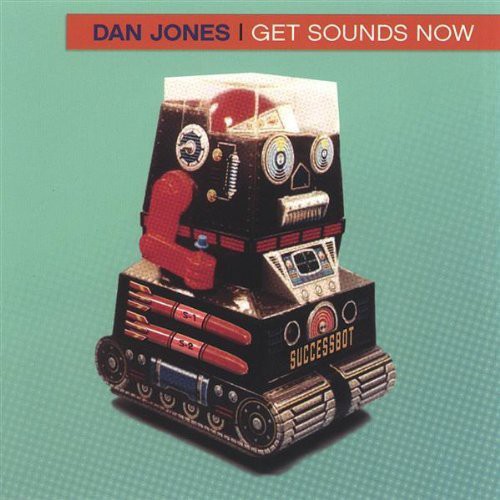 Oregon's garage poet Dan Jones has been singing his omnibus of americana/punk tales since 2000, when he self-released his acclaimed, off-the-cuff For Your Radio. ('Any given verse of his songs packs more wit than a roomful of singer-songwriters could muster in a month of open mikes,' said The Willamette Week then). Summer 2005 sees the release of Dan's third album, Get Sounds Now, a Guided-By-Crazy Horse bulletin knocked out on the fly with the help of his band, The Squids, featuring friends from Testface, White Hot Odyssey,The For, Pellet Gun, The Visible Men. The Oregonian says Get Sounds Now 'shines with Jones and The Squids musical maturity,' citing iconic musical influences Lou Reed and The Minutemen. 'The angst and angles within the story lines come across with a wry humor and sympathy...never the urgent, needy, in-your-face variety.' The Eugene Weekly says 'Jones scores with Get Sounds Now...strong song after strong song.' The Willamette Week calls Jones' work 'brilliant' and 'irresistable.' As for his solo gigs, The Portland Mercury invites the listener to 'smash your head against the acoustic punk rock.' And Mike Watt says 'I'm thinking D. Boon would dig a cat like Dan Jones.' In 2003 Leisure King Productions (Tom Heinl, The Visible Men) released Dan's One Man Submarine, a collection of americana, punk-influenced power pop, and garagey rock songs. The Portland Oregonian called the record 'irresistibly tuneful,' while the Cincinnati City Beat's Positively Yeah Yeah Yeah column declared Dan a 'late-blooming master songwriter' and the record 'a stunning indie gem.... electric, haunting, spontaneous, and fun.' Performing in the clubs and listening rooms around the Northwest, Dan has shared bills with Mike Watt, Erin McKeown, Steve Wynn, Love, Season To Risk, The Minus 5, Stew, Jason Ringenberg, James McMurtry, Peter Case, Clem Snide, Roy Harper and many others. Oregon Voice Volume XVII, Issue 1, Fall 2005 Clocking in at slightly more than half an hour, Dan Jones' Get Sounds Now is a whirlwind of raw rock and roll color. Sounding like The Who fronted by an unpretentious, tuneful Lou Reed, Jones bashes out his short tunes with equal parts fire and tenderness. Get Sounds Now has the magical, inexplicable appeal of an album that gets you through. Tiny artifacts sparkle on top of the music; a piano chord here, a tucked-in acoustic guitar there, a well-placed crunchy guitar chord, or a beat of silence. Atop this sonic bedrock Jones lays down his deceptively literate lyrics. Not many songwriters can make references to William Faulkner and Russian aerospace exploration without sounding self-referential. Jones steers through the modern landscape with artful randomness, telling bittersweet stories and showing usthe pictures, too. Rating: red wagon out of generic fond memories. (Jon Itkin.)
This website uses cookies to personalize content and analyse traffic in order to offer you a better experience.
I accept Learn More
back to top