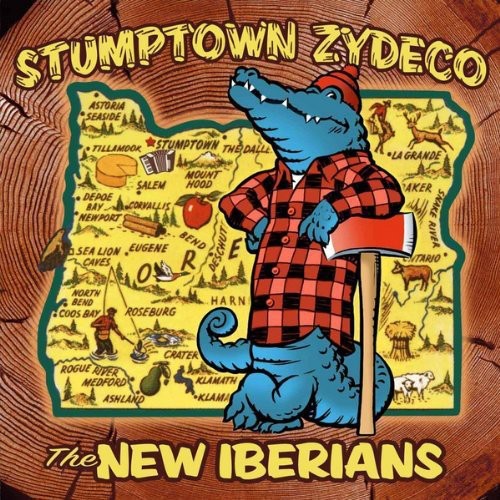 From the Pacific Northwest comes the third CD of original music and cool covers by the New Iberians Zydeco Blues Band. The New Iberians take their name from the gulf cost berg New Iberia, Louisiana, the queen city of the Bayou Teche, center of red pepper hot sauce production, and unofficial Cajun Capital. Firmly planting Louisiana roots in fertile Oregon soil the band took time from their busy touring schedule to wax a dozen tunes showcasing band leader Evan Shlaes on accordion and Claes Almroth on harmonica, with Cajun enforcer Paul Bassette on Frottoir (washboard) and homeboys Linc McGrath on Bass and Fred Ingram on Drums. ? Adding their considerable talents are local heros John Koonce (ex leader of Johnny and the Distractions) and Rob (Bob Love International) Woods on guitars and vocals. W.C. Handy award winner Terry Robb co-produced the CD and also contributes a sweet acoustic guitar solo on one cut. The New Iberians formed in the late 1990's from the ashes of another local Zydeco group, Mumbo Gumbo. Left with bookings but no band, leader Evan Shlaes called on some old blues friends for help. Not caring for the old monicker he chose to rename the band after a recent visit to the Gulf coast. Initial objections to the new name were put to rest after their first Northwest gig, when some coeds from LSU showed up after seeing the name in the press, and the guitar player got lucky... Passing years have seen many personnel changes, but the core of the band, Evan on Accordion and Paul Bassette on Rubboard have remained central to the project. Evan was born in Chicago, Illinois and absorbed honky-tonk stride piano and blues guitar before moving to Portland, Oregon and embarking on a career as a concert sound engineer. A visit to the Rose City by Queen Ida sparked an interest in Zydeco Accordion, and it wasn't long before he was playing squeezebox in between sound gigs. Paul Bassette was born in the Northwest to Acadian parents and kicked around various occupations after leaving the Navy, including running a peepshow at the 1962 Seattle World's Fair. He became the percussionist for the legendary pH Phactor Jass Band, and owns one of the West Coast's premier vintage shops, Portland's Avalon Antiques. A common interest in Louisiana music and old things (Evan owns a notorious, glorified junk shop called Really Good Stuff) brought them together in 1998. The band's current line-up, with Claes Almroth on harmonica and sharing vocal duties with Evan, dates from 2007; their first studio CD, "Bon Temps Rouge," was released in 2008. (An earlier live CD was released in 2002). Their new CD's title "Stumptown Zydeco" refers to the band's hometown, Portland, Oregon's unflattering pioneer nickname, as well as their music, a unique creole of Louisiana Zydeco, Chicago Blues and Northwest Rock and Roll. The CD opens with "Shake It!," an original tune by Claes Almroth, who has the distinction of being the only Swedish national Zydeco Blues Harp player around (that we know of). Next up is the title tune from the album. "Stumptown Roll" originated as an extended jam from Evan and Claes' first gig together. The band performed it as an instrumental until Evan's 90 year old dad wrote some lyrics that fit perfectly, Jon Koonce plays the ripping guitar solo on this take. "Et Tu Big Mamou" is reworking of a fast Zydeco standard into a slow sexy Rhumba, with a sinuous Soprano Sax solo by be-bopper Bradley Ulrich. Jon Koonce does vocal and guitar duties on a Zydeco version of Ike Turner's "Think It's Gonna Work Out Fine," with some tasty rhythm guitar by Bob Love and Nick Gefroh joining Paul Bassette on percussion. Evan sings one of his all time favorite ballads, the Casino's "Then You Can Tell Me Goodbye," recast as a Cajun waltz, then Claes fronts an energetic "Lover Please Come Back," an R & B classic by Clyde McPhatter. Bassist Linc McGrath is up next, singing a driving version of Chris Gaffney's plaintive love song "East of Houston, West of Baton Rouge". Evan's tune: "Charlize Bayou" is about a famous juke joint near coastal Louisiana, where the locals go for crayfish, gumbo and good music. Guitarist Bob Love sings a very heartfelt version of Buck Owens' "Love's Gonna Live Here," and Claes goes "Walkin' to New Orleans" with Fats Domino, followed by a rollicking Zydeco send up of Booker T and the MG's instrumental monster hit "Time is Tight," appropriately retitled "Les Temps est SerĂ©". Another original tune by Evan and his dad, "Corn Nuts" rounds out the album.
This website uses cookies to personalize content and analyse traffic in order to offer you a better experience.
I accept Learn More
back to top