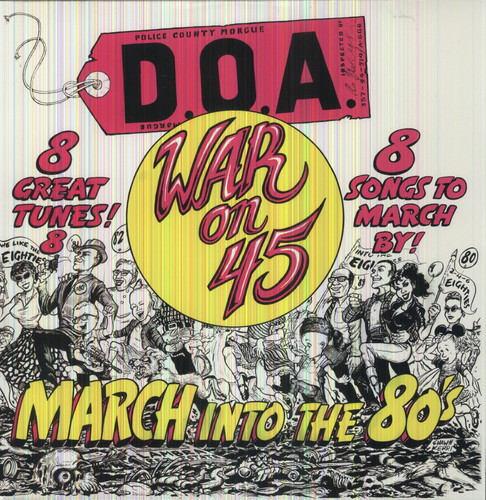 Limited vinyl LP pressing of this classic Punk mini album, released to coincide with the 30th Anniversary of the original release. Produced by Thom Wilson (The Offspring, Iggy Pop) and originally released on Faulty Products and Alternative Tentacles, this eight-song 12-inch plays at 45 RPM (which confused a lot of people back in 1982 when they spun it at 33 RPM) and it was the band's follow-up to their landmark Hardcore 81 album. Alongside core DOA members Joey Shithead Keighley and Dave Gregg, the recording features the rhythm section of Ken Dimwit Montgomery (Pointed Sticks) on skins and vocals, Brian Wimpy Roy Goble (The Subhumans). War on 45 was hailed for it's collection of anti-war songs right at the height of President Ronald Reagan's Cold War rhetoric and nuclear arms buildup.