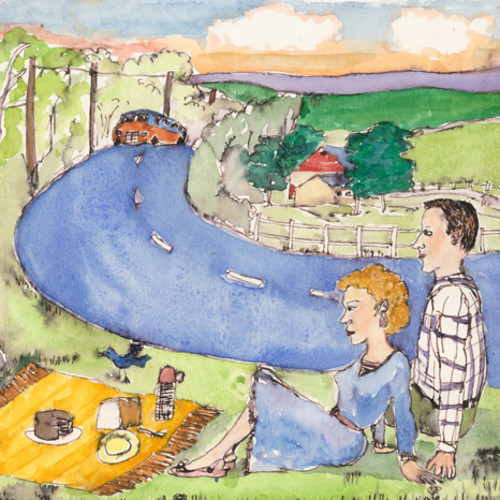 First two Magnetic Fields albums to be released on vinyl for the first time The Magnetic Fields’ first two albums, The Wayward Bus and Distant Plastic Trees, will make their debut appearance on vinyl in December 2016, packaged together as a two-LP set. Distant Plastic Trees, the Magnetic Fields’ first album, was originally released in England and Japan in 1991. To the amusement of frontman Stephin Merritt, who composed and recorded the album electronically with virtually no live instruments, Distant Plastic Trees was called “a contender for album of the year” by Folk Roots magazine. But the nomination did not come entirely out of nowhere: Merritt’s accordion player, the novelist Daniel Handler, later noted that “this tinny and intimate recording, in quiet defiance of the reigning roar of pop music, recalls both the early, scratchy field recordings of folk music and the first experiments in electronic music—precisely the sort of stylistic balance the Magnetic Fields liked to achieve.” The album includes the early-’90s college radio single “100,000 Fireflies” which had earlier appeared as a single on Harriet Records and was later covered by Superchunk. For its domestic debut, Distant Plastic Trees was paired with the Magnetic Fields’ 1992 album The Wayward Bus on a single CD that came out on the band’s own PoPuP Records imprint before its re-release on Merge in 1994. While both albums feature singer Susan Anway (formerly of early-’80s Boston punk band V;), the latter introduced several new players who would subsequently make regular appearances on Merritt’s various musical projects. “With the 1991 debut album Distant Plastic Trees, the Magnetic Fields’ composer and frontman Stephin Merritt introduced the first incarnation of the Magnetic Fields. On this album, deadpan vocalist Susan Anway sings lyrics of heartbreak and surrealism over a bed of inscrutable instruments played and programmed by Merritt,” Handler explains. “The second album, The Wayward Bus, adds cellist Sam Davol, tuba player Johny Blood and percussionist Claudia Gonson to create a plinky, orchestral sound in tribute to pop producer Phil Spector and his ‘Wall of Sound.’” The album artwork on both Distant Plastic Trees and The Wayward Bus was created by watercolorist Wendy Smith, who had also painted album covers for the Rough Trade band Weekend (a musical project from members of Young Marble Giants). Her beautiful wrap-around paintings, now printed in a larger format, along with remastered audio make this two-LP set an exciting addition to the Magnetic Fields discography.
This website uses cookies to personalize content and analyse traffic in order to offer you a better experience.
I accept Learn More
back to top