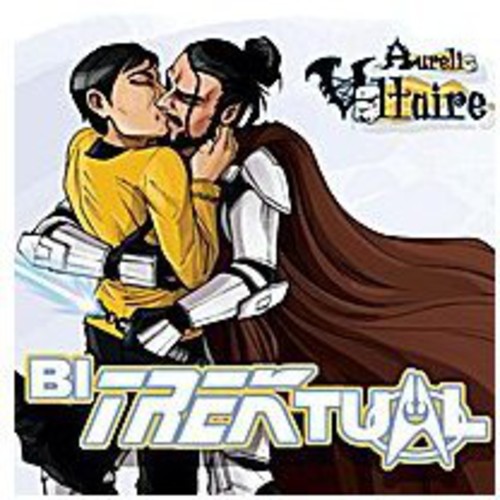 The sexual virtues of Data are sung, Tribbles are deflowered, Worf reveals what other parts of his body are ridged and Luke is horribly violated by every monster in the Cantina in this unbridled, X-rated romp through the Star Trek and Star Wars universes. Prepare to laugh uncontrollably as your childhood is blasted like Alderan into a million pieces! Years ago while at DragonCon in Atlanta, Georgia, Aurelio Voltaire (formerly 'Voltaire') entered the 'Filk' room and came out transformed! His love for Star Trek and bawdy, drinking songs collided and the result was a 4-song EP called 'Banned on Vulcan' that included the now classic 'Sexy Data Tango', 'The USS Make Sh*t Up', 'Worf's Revenge' and 'Screw the Ocampa'. That CD has been out of print for some time now and Voltaire decided it was time to do something about it. However, rather than just re release it, he's rerecorded those four songs with a full band and written a bunch more Star Trek, Star Wars and even a Doctor Who song to add to the mix. The outcome is an absolutely hilarious collection of bawdy parody songs definitely not for kids, clergy or Cardassians! Star Trek Actors Join Voltaire to Boldly Go Where No One Has Dared To Go Before! Joining Aurelio Voltaire on this hysterical away mission are Garrett Wang, Tim Russ and Robert Picardo (Ensign Kim, Tuvok and the holographic doctor from Voyager respectively). Garrett Wang and Tim Russ sing back-up with hilarious results on the Voyager campfire song 'Screw The Ocampa'. Robert Picardo lends his talents to the bonus title track 'BiTrektual' as well as plays Biggs Darklighter from the Star Wars saga on the wonderfully showtuny 'Expendable', an epic battle between a Star Trek redshirt and Star Wars stormtrooper. Also on that track playing a Star Fleet officer are Tim Russ and Godhead lead singer, Jason Charles Miller as a stormtrooper. Jason Charles Miller also kicks off the album on the title track, 'BiTrektual'. It's the most out-of-this-world, pervy fun you'll have outside of a wormhole!