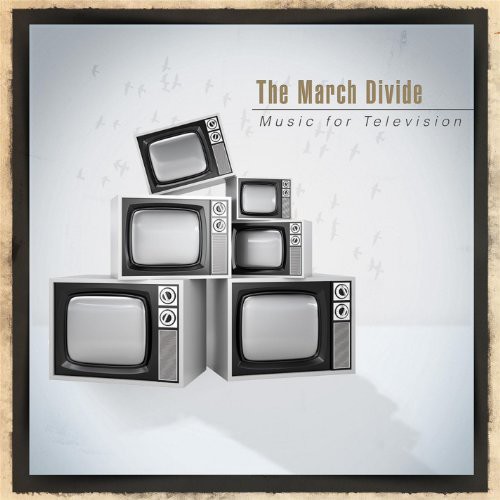 Said to combine "angsty punk-folk style with an incredibly passionate web of lyrical brilliance," by Nanobot Rock Reviews, "Music for Television" is a quick follow up to The March Divide's critically acclaimed debut, Music for Film. "In the six years since ending The Conversation and beginning The March Divide, I had written a lot of songs," says San Antonio-based Jared Putnam about the down period that followed years on the road with his popular Emo-era touring band. "When I decided to start working on an album, I had a really difficult time just figuring out where to start." Eventually, Putnam issued Music for Film, the debut album by The March Divide, in February of 2013, and it was readily apparent that half a dozen years away had not taken a toll on his songwriting chops. Called "impressively hooky" by American Songwriter, Austin's NPR affiliate KUTX simply stated, "This album kicks butt." "Music for Film was the first album that I produced myself, and it was a pain in the ass!" Putnam jokes. Undeterred, Putnam is moving forward quickly, and has issued an EP follow-up to Music for Film, the appropriately titled "Music for Television" on July 9th, 2013 once again through Dead Letter Records. Called "infectious indie rock and a companion piece for it's fantastic predecessor" by The Daily News - Pittsburgh, "Music for Television" has received a strong response by a wide variety of the press. "L.A.," for example, was premiered by CMT Edge, while the video for "So It Goes" was premiered by USA Today. "As an accompaniment to the full length, this EP makes for a great added bonus in many ways. But that isn't to say that this EP can't hold it's own," says Raised By Gypsies. Putnam will also continue the touring that he eased back into as interest in The March Divide grew. It's something he approaches with caution, considering his previous life experiences with being on the road. "All of that time on tour wrecked my personal life," Putnam explains of his time in The Conversation. "It was coming out in the worst way when I would perform, but as I started The March Divide, the void from not playing was just too big to ignore. These days, I'm not the road warrior that I used to be, but I'm playing a lot. I love playing, and I can't wait to build up to the schedule that I used to keep." Putnam is also now performing more and more with a full band. "I'm still doing solo shows and tours, but we have grown into a band," he says. The March Divide's live show now includes Mike Hernandez on drums who has been performing with Putnam in his various musical incarnations for more than 15 years, and Jeremy Brooks on bass, a former member of the now defunct Furthest From The Star, a popular band around Texas. "Music for Television" was recorded with the help of former bandmates from The Conversation - Jorge Ramirez (on Bass) and Mike Hernandez (on Drums), musician Laura Wheeler joined them on Vocals and Cello to round out the performance. About the song selection on "Music for Television," Putnam explains, "Every album I'd done in the past was approached with a concept, but when I began recording Music for Film, I had songs coming from all over the place. So, I sent them all to my trusted mix engineer, John Glover, and he decided how to split the tracks up between the two releases. Essentially, it's one big piece of work, and I'm proud of it all." The first single released from "Music for Television" was "So It Goes," which Putnam initially intended as a sweet pop song, but drummer Hernandez had different ideas. "When I got together with Mike," Putnam recounts, "he came in beating the shit out of his drums and I felt like I had completely misinterpreted my own song!" Of the story behind the catchy tune, reminiscent of early-era REM and The Cure, Putnam is coy. "I'd rather not get into the specifics of what the song is about, but I'll say that it only took one stupid decision by somebody to completely change the course of my life. But, so it goes, right?" "Music for Television," the follow-up EP to The March Divide's debut album Music for Film, was released on July 9, 2013 on Dead Letter Records. The March Divide will continue touring throughout 2013.