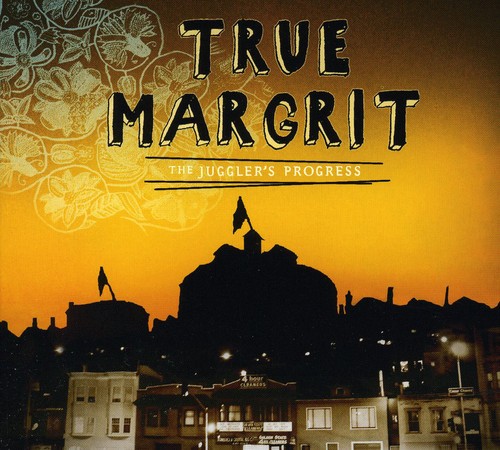 Based in San Francisco, True Margrit is fronted by singer/songwriter/piano-player (and transplanted Knoxvillian) Margrit Eichler. True Margrit's sound is fueled by Eichler's husky/sweet alto, her aggressive piano-playing, her surreal & infectious tunes, and by the fleet-footed rhythm-section of Gary Hobish on bass and Andrew Bacon on drums. The act has been touring the west & east coasts featuring a long string of nightclub, radio, television, and in-store engagements. THE JUGGLER's PROGRESS also features bay area guest stars-including virtuoso violin by Gloria Justen (of the Philip Glass Ensemble), lush backing vocals by Pam Delgado, and deft guitar by Jeri Jones ( both of whom are in San Francisco buzz-band, Blame Sally). True Margrit has released four recordings: PEUT-ETRE la FENETRE, SYMPATHETIC MAGIC, DECEPTIVELY TRUE, SEAWORTHY, and the fifth: forthcoming on January 19, 2010, THE JUGGLER's PROGRESS. ************************* 'Strong melodies, mind-bending chord changes, and hooks that stick in your head. Highly recommended.' -David Bash, International Pop Overthrow Festival "...a piano-pop sound that would make Ben Folds jealous and blush with delight. Get this album now."-J-sin, Smother.net "Eichler tickles the ivories and stomps on them, often at the same time...sweet at one turn and elasticized at the next, Eichler's voice is somewhat reminiscent of Aimee Mann and Andrea Perry, she bends the notes when it's appropriate and sings them straight when it's not. Hers is a remarkable instrument-emotive sensitive, and aggressive when the mood demands. She's quite the talent on to be reckoned with...Eichler's playful use of language and keen ability to flesh out a story, sometimes with the barest of details, is one of the singer/songwriter's most affecting traits...brilliant."-Alan Haber, Purepop Radio/ buhdge.com "Devilishly clever." -Molly Gilmore, The Olympian.
This website uses cookies to personalize content and analyse traffic in order to offer you a better experience.
I accept Learn More
back to top