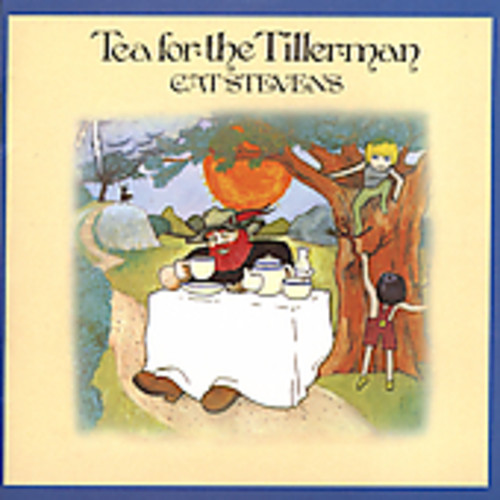 2000 remastered reissue of the singer/songwriter's 1970 fifth album. Produced by Paul Samwell-Smith (the Yardbirds, Renaissance, Carly Simon). It was the second album he released in 1970 with Cat once again illustrating the cover artwork. This landmark album was listed in the 100 top selling albums of the 70's. in 2003, Rolling Stone Magazine included this album in it's "500 Greatest Albums of All Time". in 2006, the album was included in the book "1001 Albums You Must Hear Before You Die". in 2007, the album was included in the list of "The Definitive 200 Albums of All Time" released by the National Association of Recording Merchandisers and the Rock and Roll Hall of Fame. Several tracks from the album were also included in the cult film titled Harold and Maude, in 1971. The album includes hits "Wild World", "Hard Headed Woman" & "Father and Son" a sentimental favorite of the era.

''Tea for the Tillerman'' is an album by singer-songwriter Cat Stevens. This album, Stevens' second during 1970, includes many of Stevens' best-known songs including "Where Do the Children Play?", "Hard Headed Woman," "Wild World", "Sad Lisa," "Into White" and "Father and Son". Four of the tracks ("Where Do the Children Play?", "On the Road to Find Out", "Tea for the Tillerman" and "Miles from Nowhere") were featured in the Hal Ashby and Colin Higgins' black comedy film entitled ''Harold and Maude'', in 1971. The track "But I Might Die Tonight" was featured on another 1971 film: ''Deep End'' by Jerzy Skolimowski. Stevens, a former art student, created the artwork featured on the record's cover.

With "Wild World" as an advance single, this was the album that brought Stevens world-wide fame. The album itself charted into the top 10 in the United States, where he had previously had few listeners.

The title-song "Tea for the Tillerman" was used as the ending theme for both series of the Golden Globe-winning BBC-HBO sitcom Extras, written and co-directed by Ricky Gervais and Stephen Merchant.

In November 2008, a 'Deluxe Edition' was released featuring a second disc of demos and live recordings. - Wikipedia