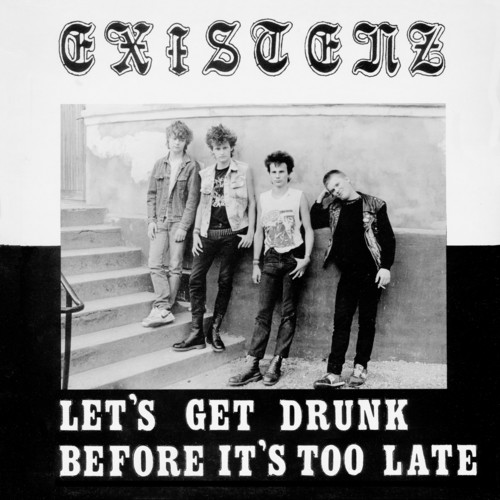 Let's Get Drunk Before It's Too Late
Artist: Existenz
Format: Vinyl
New: Not currently in stock
Wish

Existenz was formed in Helsingborg, Sweden 1981 and released their first Ep "Listen" in 1983. The EP was quickly sold out and is today a very hard to find collector's item. In 1984 their follow up "Let's get drunk before it's too late" was recorded and at that time their first bass player Roland Olsson left the band and David Butolen joined the band. It is this lineup, Jyrki, Jocke, David and Stefan Existenz are most known for. Gigs were played all over Sweden/Denmark with bands like The Bristles, Asta Kask, Anti-Cimex and many more. In the autumn of 1984 three gigs were played in London with bands like UK Subs, Vibrators and One way System. In the summer of 1985 a mini tour was made from north to south of England with bands like Varukers, Instigators and Urban Dogs. Since a year and a half Existenz are reunited in the original line-up and have this autumn played a number of highly acclaimed gigs with bands like Sator and Shuvit. During spring 2018 the album Let's get drunk... will be re-released and a new single vinyl will be released by HepTown Records to the Fall.
back to top