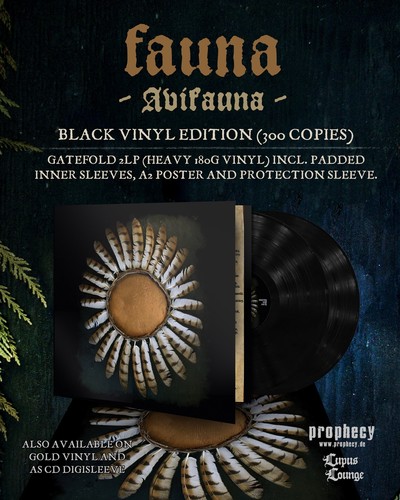 Originators of Cascadian Black Metal, Fauna have made an incredibly deep imprint on the American metal scene. Utilizing both unrelenting black metal alongside periodic acoustic meditations, they stand as a truly unique force, impacting fellow artists Agalloch and directly influencing the development of Wolves in the Throne Room. But while these artists have thrived in the public spotlight, Fauna chose to stay in the shadows, and to remain quietly in the damp, wild forests of the Pacific Northwest. In 2012 "Avifauna" emerged as the latest album released by Fauna. The album explores the connections between bird flight and the human spiritual quest, centering around a dialogue between numinous Others and ourselves in a dance of interwoven meanings. With so much of the sound Fauna fans have loved from the previous two efforts, "Avifauna" is distinctly unique. Being released so late after "The Hunt" in 2007, many fans were eager to see the band's direction, and the album did not disappoint. "Fauna's third LP definitely proves itself to have been worth the wait and should definitely establish the band as one of the true heavyweights in American black metal." (Sputnik Music) The album opens with delicate bird songs, chirping and ushering you into soft, acoustic melodies both eerie and deeply melancholic. This enchanting invitation gives way to raw black metal fury. The album is written in such a way that it's oscillations between heaviness and melody jar and disorient the listener, all while building a deep relationship with Fauna's musical journey. While still incorporating the band's trademark soundscapes, "Avifauna" is much more melodic and less sound heavy than the previous release, "The Hunt".