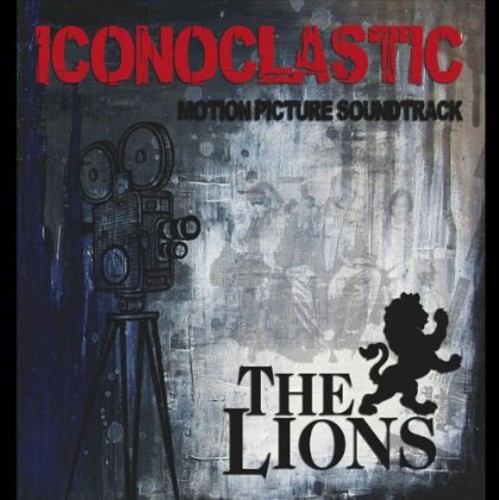 'A hard working trio making waves with their unique take in Britpop. The latest double CD release is their best yet, a concept album where the tracks play out like short films. The album is reminiscent of early Oasis, before Alan White quit the band, Liam Gallagher shat his pants and Noel finally wrote a decent solo album 8 years later. Just get this album instead. Why aren't these guys famous yet?' -Bryson Montgomery Beatroute Magazine 'This British trio survey the hard rock edge of Led Zeppelin while implementing a revivalist approach, making their latest album a timeless listen.' -SPINNER (online magazine) 'Spectacular!' -Jim Gellatly, Scottish Radio Legend It can't get much better than 'spectacular'. This is what Scottish DJ Jim Gellatly, host of In: Demand Uncut, and Jim Gellatly's New Music Podcast, said of Canadian band, The Lions' new album, Iconoclastic: Motion Picture Soundtrack and Pub Songs and Sing-a-longs when he played their track, 'Champions!' on the New Music Podcast. Gellatly features 10 emerging Scottish tracks on his weekly podcast. Including The Lions because of their Scottish front man Chris Millar, Gellatly said of the band, 'What they've done is create two albums in one calling it Iconoclastic: Motion Picture Soundtrack and Pub Songs and Sing-a-long and the result is pretty spectacular.' -Green Light Go, L.A. 'BJM fans ought to enjoy this, as will geezers like me who actually remember when lots of bands tried (and failed) to make music this good. Eighteen tracks, no filler' -Aiding and Abeiting Concept behind the album: Serial killers, assassins and boxers. It's not cable TV; it's the cast of characters of Calgary's The Lions' latest album, Iconoclastic Motion Picture Soundtrack/Pub Songs and Sing-a-Longs, a record that is composed of soundtracks to individual scenes of a movie that doesn't exist. The mini rock-and-roll soundtracks are melodic, aggressive and jazzy often all at the same time. 'The Lions sound like Snatch, Lock Stock & Two Smoking Barrels and any other movie Guy Ritchie has made without Madonna in it,' lead songwriter Chris Millar quips. 'We can go from '60s pop, to groove driven riff rock, to rowdy good time pub tunes. We have a big sound, but we don't use synthesizers.' Iconoclastic Motion Picture Soundtrack/Pub Songs and Sing-a-Longs will be released September 6. As you might expect from the title, Iconoclastic Motion Picture Soundtrack/Pub Songs and Sing-a-Longs showcases the band's diverse approach to music making. The inspiration behind the name is, not surprisingly, a film. 'Iconoclastic is basically a cool word for one,' says Millar. 'I wanted it to be like The Grindhouse: Planet Terror / Death Proof, two completely different movies on the same bill.' The band produced the album taking a different approach from previous albums. 'We usually play the songs for a year before recording,' Millar explains. 'This time, we worked on the songs for a week, then went in and hit the record button. The guitar parts were improvised around the chords we jammed out the first day, and then we had a few months to Polish the sound. We did some classic sounding pop tunes and soundtracks for short films, split into different acts and scenes.' 'Roman, The Ubiitsy Mesti' is the tale of a Russian assassin tracking down his enemy. Millar's slow and simmering guitar gradually builds to a discordant climax as the assassin closes in on his prey. Justin Luchinski's steady, throbbing bass and Liz Dumenko's cymbal splashes contribute to the dramatic effect. The dark, over the top rocker 'Syd... Is A Serial Killer!' is an avalanche of clanging guitars with lyrics that sound like a Tarantino script. The song was created after watching a documentary on Syd Barrett and then 'Dusk Till Dawn' right after, thus creating the idea of turning Barrett into a ballerina dressed serial killer. 'The Social Commentator' is a sci-fi epic - a fight between humans and machines - in three acts. It moves through acoustic folk, stomping rock and wailing proto-metal guitar passages before coming to a triumphant conclusion. On the lighter side, you've got the Beatles meets Oasis romp 'Jane I've Had Too Much To Drink'. Millar's 12-string dances around the rhythm section's bright 60s backbeat. The soaring 'You're A Star That Shines (In Your Own Eyes)' has Millar complimenting his sincere vocal with a wall of shimmering guitar effects. 'Marc Bolan's On Our Stereo?' tells the story of the band's first US tour with a hint of T. Rex in it's bluesy progression. The album closes with 'Rum N Coke', an instrumental showcase for Millar's late night, reverb drenched guitar - a Jimi Hendrix meets Dick Dale kind of thing.
This website uses cookies to personalize content and analyse traffic in order to offer you a better experience.
I accept Learn More
back to top